Bitcoin has a problem in order for it to reach the early majority phase of adoption: ease of use. If the ease of use of bitcoin isn’t going to be improved, the adoption will move very, very slowly. Let me explain why.

If you look at the five phases of adoption (innovators, early adopters, early majority, late majority and laggards) you can safely say that bitcoin is now in the early adopters phase. 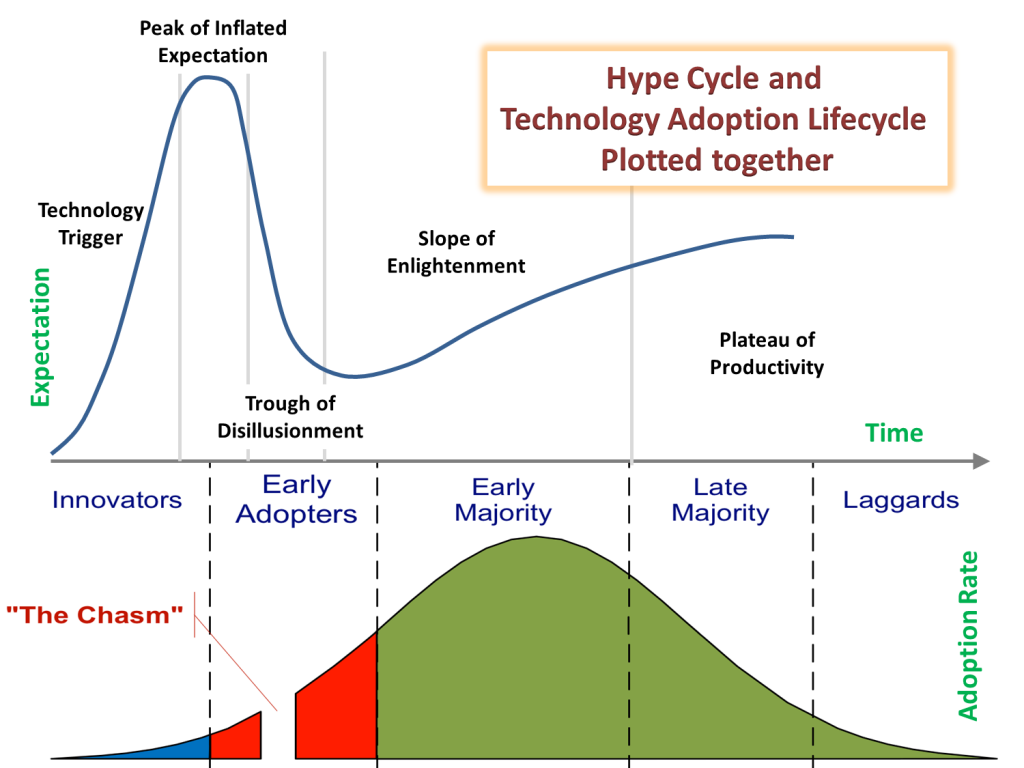 So, bitcoin faces the chasm right now. This is the time when entrepreneurs and visionaries must arise to solve the number one problem bitcoin has: ease of use.

Bitcoin is still dificult to use and understand

It is still difficult for people with no or little tech knowledge to buy bitcoins and start using them. Exchanges try to make it as easy as possible, but it just isn’t easy enough. The whole process of exchanging USD or EUR for bitcoins is understandable, but not workable for non-techies.

Then there is the problem surrounding the actual use of bitcoin: wallet addresses aren’t something you can remember and tell a friend if he has to pay you some money he owed you. Online retailers are starting to accept bitcoin, but when you are offline and shopping in your town center, you have no use for bitcoin.

Another problem is the fact that bitcoin (the technology itself) is a quite difficult concept to grasp if you aren’t familiar with cryptocurrencies or tech in general. Many people may be trying to use bitcoin because of all the news reports, but are freaked out about the difficulty surrounding the concept of it.

How are we going to change this? By making bitcoin easier and inventing products and services that give it a real day-to-day use.

A lot of startups are trying to do that, but I still feel they are using bitcoin because of bitcoin. They aren’t making products or services that actually make things easier, they are just making things for bitcoin instead of making things with bitcoin. They only copy certain functions of transactions and cash that we already have and replicate them for bitcoin.

Making products for bitcoin won’t help the adoption, because it doesn’t give the early majority a real day-to-day use for it. It only makes the lives of the early adopters easier, because the stuff they were doing just became a bit easier, faster and/or better.

Moving to the early majority

If there were services or products that are built with bitcoin, that give people a real reason to use it, the adoption of bitcoin as a currency will go much faster.

I think it can be quite difficult to think that way when all you’ve been doing is working with bitcoin in the early adoption phase. All the bitcoin startups are mostly focussing on problems that the early adopters have, instead of the problems holding back the early majority.

So let’s look at the problems that are holding back the early majority. It’s important to mention that some of these problems aren’t fully bitcoins fault, but instead inherent to the current financial system, that can be solved by bitcoin making using it even more tempting.

Technology to the background

Of course, bitcoin has certain advantages over the traditional banking system, like it’s near-instant transactions or the fact that it’s very fraud-proof. You can mention that these functions of your product are there because you’re using bitcoin, but don’t make it too crazy.

Circle almost nailed it, but they still are too focused on the fact that it’s based on bitcoin. Their headline, “The way money should be”, is good. But the next sentence, “bitcoin is digital money for the modern world”, is too focused on bitcoin. If they said something like “We make sending money instant, secure and free”, than people will be interested to keep reading. Notice the difference? I didn’t mention bitcoin once, but it still summarizes the things bitcoin can do.

Another major hassle these days is to memorize your wallet address. This is also a problem of the traditional banking system, where you need to remember a bank account number to transfer money to a friend. The European Union even made it more difficult by introducing IBAN (International Bank Account Number), so that European transactions can be carried out more easily. You just can’t remember a string of 18 characters for all your friends.

Coinbase already tries to solve this problem by enabling users to type in the email address of the person they want to send bitcoin to. But everybody knows that email addresses change and most of the time aren’t easy to remember.

So if you are building a product with bitcoin, please make sure that your users are able to type in the name of their friends if they want to send them some money. It is not difficult to do (phone integration for example), and it’s definitely something that will make bitcoin’s use case more interesting for the early majority. Imagine this: you meet someone new, add their phone number as a contact and immediately are able to pay for their coffee. That’s something you absolutely can’t do with the current system and bitcoin products.

Because bitcoin is based on technology, I can think of a great number of things that can add value to our existing payments we make to friends and family. Adding a photo, voice memo, location or even a video is something that’s possible.The sky’s the limit. It is up to the people to think of new innovative ways to pay each other. Things that weren’t possible before now can become reality.

Like I said before: if there were services or products that are built with bitcoin, that give people a real reason to use it, the adoption of bitcoin as a currency will go much faster.